Dick Hyman about playing the piano, jazz and life 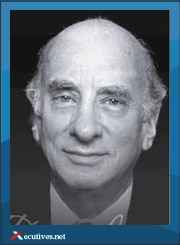 Richard Roven Hyman, better known as Dick Hyman, was born in 1927 in New York. Mr. Hyman has been recognised by many critics and insiders as one of the finest Jazz pianists on earth. This living legend played the keys and arranged music for people as famous as Benny Goodman and Count Basie. He received an Emmy for his original score for Sunshine’s on the Way, a daytime drama, and another for musical direction of a PBS Special on Eubie Blake. He himself became very famous when he started to arrange and play music for several Woody Allen movies. Dick Hyman has stayed in Switzerland on many occasions, giving enthusiastically received concerts here. In 2006, he was awarded with the German Jazz Award for best Jazz musician. Dick Hyman lives in Venice (Florida), and is still very active playing the piano and also mentoring younger talents.

Dueblin: Mr Hyman, you were in Switzerland several times playing the piano, and you are greatly admired here. In 1998 you were invited by Mr. Ernst Beyeler to play the piano on two grand pianos in the Fondation Beyeler in Riehen together with the Jazz legend Ralph Sutton, who died in 2001. I was in the audience and was amazed at the atmosphere both of you created. But this was not your first trip to Switzerland. When did you first come to Switzerland and what are your memories of the Switzerland you met those days?

Dick Hyman: Other than a brief visit with my parents in 1937, my first recollection of Switzerland goes back to 1950, when I played there with Benny Goodman. One of those concerts – at Lausanne – was broadcast by Swiss Radio and only 2 years ago was released as a CD. I was delighted to hear it after all these years. In addition to the concerts in Switzerland, the band, without Goodman but under the direction of Roy Eldridge, played a week at Bern at a nightclub. Years later I was in Bern again for Hans Zurbrugg’s International Jazz Festival, which was televised, and on another occasion there was a week in his club, playing solo. This would have been in the 80’s or early 90’s. More recently I’ve been associated with producers Jörg and Doris Koran, for whom I´ve given a number of concerts. This includes two occasions at Ernst Beyeler´s gallery, one with Ralph Sutton, the other with Bernd Lhotzky. I´ve also recorded a number of albums for their label, Jazz Connaisseur, one solo, one duo-piano with Bernd Lhotzky and another duo-piano album with Louis Mazetier. On the last tour I again recorded at the Alte Kirche in Jonen for an American company, Victoria, with Chris Hopkins. So my experiences in Switzerland have been numerous and I´ve always enjoyed returning and Dick Hyman: spending time there. 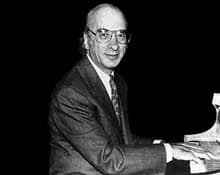 Dueblin: You were born in 1927, in a moment when great jazz musicians lived, in the roaring twenties. I am talking about musicians and legends such as Louis Armstrong, James P. Johnson, Art Tatum, Thomas Fats Waller but also Willie the Lion Smith. What are your memories about your first years as a child and then as a young pianist?

Dick Hyman: When I was growing up, those giants were active and while I was in college in New York, I met and played for James P. Johnson and Willie the Lion. In the same period I won a competition sponsored by a New York radio station and was able to study for a time with Teddy Wilson. We remained friends until he died as did Goodman, not long after the 1982 TV program for which Benny asked me to be musical coordinator.

Dueblin: What was your reason to become a pianist, and why did you choose jazz after several years of classical studies on the piano?

Dick Hyman: I come from a piano-playing family. My mother, my uncle, who was a concert pianist, and particularly my brother, who introduced me to jazz and jazz piano.

Dueblin: Playing for Benny Goodman as a young pianist launched you into an immortal league of Jazz musicians. How did you get in contact with Benny Goodman?

Dick Hyman: I think Goodman must have become aware of my playing at Birdland, the club which had just opened in New York. I was there at different times with Max Kaminsky´s band, Lester Young and Flip Philipps.

Dueblin: Did you ever meet Swiss Jazz musicians such as George Gruntz, Henri Chaix, Daniel Humair or Hazy Osterwald, who composed the ‘Criminal Tango’?

Dick Hyman: Of these I think I remember meeting Osterwald in Copenhagen when I toured with Goodman back in 1950. 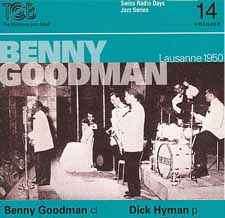 Dueblin: You have studied and performed all the different piano styles out there, and have made a major contribution as a jazz historian and performer. What is your personal favourite jazz style?

Dick Hyman: Although, as you say, I’ve made a study of many styles. My own preferred playing begins in Swing-to-bop and goes on from there.

Dueblin: One of your very favourites was Art Tatum, another legend in Jazz. What made this musician so special for you?

Dick Hyman: Tatum was the master for everyone in my generation. It was not only his incomparable technique, but his harmonies, his sense of swing and structure that still inspire me.

Dueblin: You have been mentoring several young piano talents in the last couple of years. Some of them play the old Harlem Stride style, an old fashion style of piano playing, coming from Ragtime, music that was almost forgotten some years ago. How do you explain today´s fascination for this style of music invented in the Twenties and Thirties?

Dick Hyman: I think that the farther away we get from its time, the more appealing stride sounds, simply because it is so different from today´s music and yet, in its cheerful way, so clearly challenging and complex. It has a virtuoso aspect, and it is a perfect solo piano vehicle, unlike other styles which are best played with bass, drums and guitar.

Dueblin: Jazz is known and consumed by lots of people but jazz in the last few decades does not attract a huge audience like rock or pop music. How do you explain that? Does it have to do with the essential improvisational spirit of jazz?

Dick Hyman: I don’t think that improvisation or its lack is the reason. The total culture creates its music dance art. For some sociological reason far beyond my comprehension, the times call for a particular style. 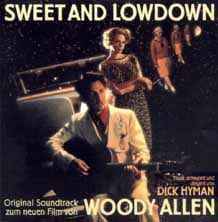 Dueblin: You became even more famous when you started to arrange and play music for Woody Allen movies. Could you tell us something about your work with this great East Coast film director, who is obviously a very good musician himself?

Dick Hyman: For about a dozen films I worked with Woody as composer, arranger, or pianist. We share an interest in traditional jazz, and throughout his films you can hear Jazz or early pop music styles. For example in ‘Zelig’, ‘Purple Rose Of Cairo’ and ‘Everyone Says I Love You’, much of the scoring is in earlier idioms. But I´ve scored other films in addition to Woody´s, such as ‘Moon Struck’ (with Cher) and numerous TV scores as well.

In the last few years my writing has taken a different direction. I´ve composed a cantata for chorus and orchestra which is a setting of Mark Twain´s autobiography, by coincidence a Mark Twain Ballet (‘Tom Sawyer’), and a lot of chamber music. This is in addition to my usual playing and directing of jazz concerts. The newest chamber work, a trio for piano, violin and cello will be premiered in two weeks and I am working on a string quartet piece. 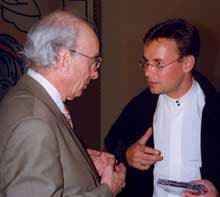 Dueblin: Mr Hyman, I thank you very much for offering your time to answer my questions. I and Xecutives are looking forward to hearing you again in Switzerland!

More interviews about piano music and composing – with pianists and other musicians: